We interviewed Jennifer Rudd, Project Manager at Leighton on her experience and thoughts on women in tech. 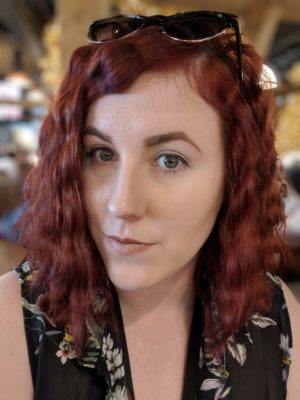 I am a project manager working on British Airways IT contracts. The role ‘Project Manager’ tends to mean different things and come with differing responsibilities depending on the company. However, the main responsibility is always on ensuring that projects run on time, within budget and to the expected high standards of quality. This can mean acting as a Scrum Master for the development and IT teams, building client relations with stakeholders and a lot of ‘fancy footwork’ to make sure things run smoothly and that when things do not, the project overall does not suffer. It helps to know a lot about digital and development when working in such an environment and with teams of techy folk.

My mother was an IT lecturer at University so I was exposed to IT from a young age. She used to practise her courses on my sister and I before rolling them out to the students. In honesty though, I left school not knowing what I wanted to do with my life. I was accomplished at quite a few subjects, especially art, but lacked direction. I enrolled at college and dropped out after a few months. I quickly realised that if I wanted to succeed in life I had to apply myself at something, so I applied for everything I could find. One of those applications was an IT apprenticeship and they took me on. That was the first rung on my ladder in a technology career. I moved onto IT engineer, customer support for an IT platform, web designer then web developer, team leader and finally, project manager. The jump to web designer came from meeting a web designer and realising that I could combine my love of art and technology in one role. It seemed perfect.

I dropped out of the typical college route, but I took an IT apprenticeship and then I did a Foundation Degree in Web Design as a mature student.

My entire career has been in IT and Digital, from the age of 15. I worked as an IT engineer (wearing a Large, men’s uniform as they had not had a female there before). I then worked with a global IT application on the support desk, helping users. This gave my invaluable customer service skills which I still use to this day. I worked as a web designer and also as a developer in several prominent NE agencies too.

I think there are a lot more women out there now than there perhaps was 10 years ago. When I first started my career, it was common place for me to be the only female in the entire company. Nowadays this has improved, although it is still by no means an equal split. Leighton has a fantastic ratio. I know there are still a lot of companies out there however who still have a predominantly male workforce.

Definitely. For starters, I used to always surprise people when I told them I was a developer. For some reason I kept being asked if I was a school teacher? Maybe I “look” like one, whatever that means.

I even see this stereotype in children. I volunteered in primary schools teaching code. There were always the same patterns that emerged. Firstly, the children were shocked that a woman was the teacher. Another observation is that there were plenty of girls at this age who were very excited to join the club. The girls in the class however always felt as though they could not do the lesson, that this was for boys and they would not be any good at it. The boys for the most part never had this mentality. With some encouragement, the girls realised that they were just as good as the boys and started to really excel. So often we see female school leavers not even considering a career in technology. They have spent their lives up until that point not believing they could and not pursuing it. If only they had more encouragement earlier on, perhaps it would not be that way.

We really need to engage with children at a young age. Expecting a school/college leaver who has up until then, believed that they cannot do technology and never tried to experience it, to suddenly show an interest, is often unrealistic. We should work with children all the way through until they reach maturity to embed a confidence in technology. Coding is currently not on the school curriculum. The code club initiative is a great way to solve this. I tend to see that girls are enthusiastic about using technology but terrified about the concept of trying to code or create. They need confidence that they can do it.

Oddly, I found when I started my career that if anything, I had more offers than I could handle. I put this down to positive prejudice. I felt that the companies often wanted to advocate women in technology and would actively seek out bringing women into their roles. I was always showcased in company updates about hiring and thrust to the front of any company photoshoots. My achievements were sometimes posted about but there was often a spin that the achievement was only great because it was done by a women. In a “isn’t it great that a women managed to do this despite her not being a man”, way. I watched my male colleagues not receive any accolade for their exceptional work. I really didn’t enjoy working in this environment. I believe in inclusivity and fairness. I’m happy to take roles and to have achievements recognised, but only for their merit and not just because I’m a woman. I fought for my male colleagues and this fairness is something I still fight for.

On the other end of this, when I reached position in my career to be moving into management roles, I have found it near impossible. There is so much prejudice that a woman, especially a relatively young one, cannot handle a leadership position in tech. Or that she might leave to have children. Suddenly I found I had to have endless interviews to find a role. The feedback was always fantastic, but there was always some excuse. “We’re worried the (all-male) team won’t gel”. “We went with another candidate in the end (who always turned out to be less experienced and a man)”. It is an infuriating uphill battle.

Run code clubs and volunteer with children. Teach our own children about technology and coding, there are so many apps out there which help with this.

Sign up to be a STEM ambassador and do talks and events in secondary schools, colleges and universities.

Get involved with schools in your community and run open-days or help them with work placements. Show children what it is really like working in tech and inspire them.