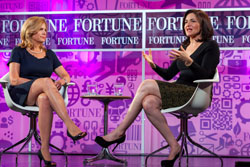 The number of women in IT and technology roles has always been dramatically lower than that of men. Employers are trying their utmost to employ more women in the sector but there seems to be a lack of women entering the tech sector. This is mainly due to IT and technology being deemed as a male dominated subject to study at school and therefore females are choosing alternative subjects to study.

However, there are a number of women senior roles within well-known tech business.  Below are 10 of the most influential women in tech:

The first influential women in tech, Sandberg,  graduated from Harvard College in 1991 with a B.A in economics, where she also co-founded Women in Economics and Government. She then enrolled at Harvard Business School in 1993 to earn her M.B.A. Sandburg had a number of jobs after graduating in 1995 until she met Mark Zuckerberg at a Christmas party in 2007 who offered her the COO job at Facebook while not actually searching for a COO. She has been with the company ever since.

Wojcicki grew up on the Stanford University campus as her father was a professor there. She then attended Harvard University studying history and literature and went onto receiving her Masters of Science in economics from the University of California. Wojcicki became Google’s first marketing manager in 1999 and then became senior vice president of Advertising and Commerce. After overseeing Google Video, she proposed that Google should buy YouTube. She handled two of Google’s largest acquisitions- the $1.65 billion purchase of YouTube and the $3.6 billion purchase of DoubleClick and then became CEO of YouTube in 2014. The huge success of Susan Wojcicki shows how influential women in tech can be for the world’s biggest companies.

After studying maths and science at Princeton University and wanting to be a Doctor, Whithman went on to studying economics and gained an M.B.A from Harvard Business School in 1979. Whithman has had a number of senior roles with large companies including Procter & Gamble, Bain & Company, The Walt Disney Company and Hasbro. She then joined eBay as CEO in 1998 when it had just 30 employees. Whitman then went on to join Hewlett-Packard’s board of directors in 2011 and named CEO just 6 months later. She stepped down as CEO of HP in 2018, but still remains on the board.  She has been the CEO of Quibi since April 2018.

Rometty graduated from Northwestern University in 1979 with a bachelor’s degree in computer science and electrical engineering. In 1979 she went to work for General Motors Institute and then in 1981 went on to join IBM as a systems engineer.  Rometty had a number of roles within IBM; she championed the purchase of the big business consulting firm- PricewaterhouseCoopers consulting, as well as becoming senior vice president for sales, marketing and strategy. In 2011 it was announced that she was to become the company’s next president and CEO. In 2012 she then also became chairman of IBM.

Ahrendts studied merchandising and marketing at Ball State University in 2010 and then moved to New York to work in the fashion industry. She worked for brands such as Warnaco, Donna Karan and Henri Bendel and then joined Burberry in 2006 as CEO. She then went on to join Apple in 2014 as senior vice president for retail and online stores and is the only female senior executive at Apple. In April 2019 Ahrendts left her role at Apple.

Catz attended the University of Pennsylvania and their Law School, as well as Harvard Law School. She then became a banker at Donaldson, Lufkin & Jenrette and then served as managing director and senior vice president. In 1999 Catz joined Oracle and became a member of the company’s board of directors in 2001. She held a number of roles at Oracle in her time. Catz was ranked by Fortune as the 12th most powerful women in business in 2009. Catz stepped up as co-CEO of Oracle in 2014 when Larry Ellison stepped down.

Porat was born in England before she moved to America at a young age. She then went on to obtain a bachelor of arts degree in economics and international relations from Stanford University and then onto graduating from London School of Economics with a master of science degree in industrial relations. Porat started her career with Morgan Stanley in roles such as Vice Chairman of Investment Banking, Global Head of the Financial Institutions and co-head of Technology Investment Banking. She then joined Google & Alphabet as CFO in May 2015.

Burns graduated from New York University in 1980 with a Bachelor of Science degree in Mechanical Engineering and then on to obtain a masters. Burns started working for Xerox as a summer intern in various roles within the company. She then went on to become executive assistant, assistant to the chairman, vice president and senior vice president before she was named CEO in 2010. Burns is the first women to succeed another woman as head of a Fortune 500 company and is rated by Forbes as 22nd most powerful women in the world. In 2018 it was announced that Burns was to take on the new role of Executive Chairman of VEON.

After graduating from Zhejian Gongshang University (China) with a degree in business administration, Peng went on to teach at the university before she joined Jack Ma in founding Alibaba in 1999. She started off managing the HR department of Alibaba before becoming CEO of Alipay- the most successful payment gateway in China. In 2014 Peng founded Ant Financial Services and then became a billionaire in the same year.

Hood graduated from Duke University with a bachelor’s degree in economics and then obtained an MBA from Harvard University. Hood started her career with Goldman Sachs in investment banking and capital market group’s roles. She then joined Microsoft in 2002 as part of the investor relations group. Hood was then announced as the company’s CFO in 2013. She is currently number 51 in the Forbes world’s 100 most powerful women.

These ten women are clear examples of how influential women in tech can be.