What is the gender gap?

The gender gap is the difference between the number of women and men that is reflected in social, political, cultural or economic skills or attitudes. It is evident that the gender gap in technology has become an issue over the years. Although some companies are showing commitment to increase the number of women in their tech teams, it isn’t something that will drastically change overnight.

The gender gap is causing problems in the technology industry such as women feeling like they are being overlooked in meetings, they aren’t taken seriously, and their ideas are being dismissed by their male counterparts. This may be a contributing factor as to why the quit rate in technology is more than twice as high for women (47%) than it is for men (17%).

Why are women put off entering the technology industry?

The gender gap isn’t the only thing that may put women off entering the industry, as it is also causing further issues such as the gender pay gap, which has become a well-known issue within several industries, not just technology. 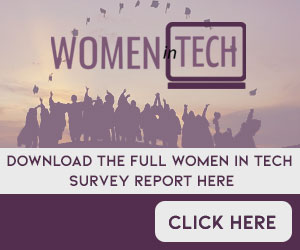 Around 78% of large organisations admitted to having a gender pay gap in tech, with males earning more than females. Only 14% of businesses have a median pay gap for women and 8% have no pay gap at all. It has been said that women earn up to 28% less than their male colleagues in the same tech roles.

There are factors that could affect the gender pay gap in tech, such as working in different hierarchy positions, different skills and experience. Other reasons that could put women off entering the technology industry include fewer opportunities for promotion, unconscious biases in recruitment processes, male domination and jobs adverts being targeted towards men.

What are the key findings from the survey?

We recently conducted a women in tech survey of over 1,000 women who work in the technology sector on their thoughts and opinions on the gender gap in technology.

In order to find out more from women about what is putting them off entering the industry, or what issues they were facing in their tech role, we asked them over 20 questions.

Questions asked in the women in tech survey were based around topics such as gender equality, why women are being put off entering the industry, the cause and solution for the gender gap, and attracting more women into the industry.

Some of our key findings from the women in tech survey includes:

To read more of the results from our Women in Technology Survey, please download the PDF format here.